Transylvania (Ardeal) is a historical region in the central part of Romania. Bounded on the east and south by the Carpathian mountain range, historical Transylvania extended in the west to the Apuseni Mountains; however, the term sometimes encompasses not only Transylvania proper, but also the historical regions of Crișana, Maramureș, and Romanian part of Banat. (more...)

Prince Charles is a big fan

The heir to the British throne first visited Transylvania in 1998 and has been a regular visitor ever since. The Prince is involved in conservation of rural villages and has bought and restored a handful of farmhouses that visitors can rent. (more...) 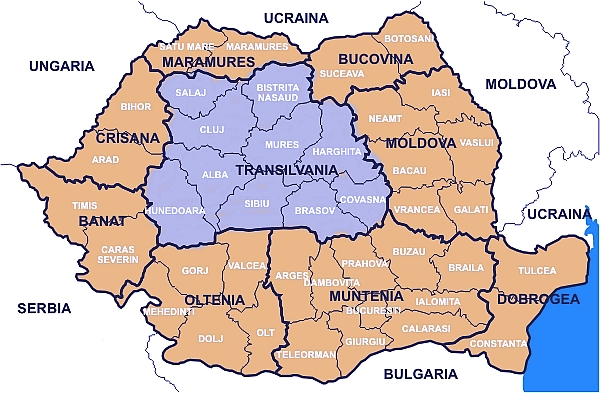 There are 10 counties streching 96,837 sq. km and over 4 million inhabitants. 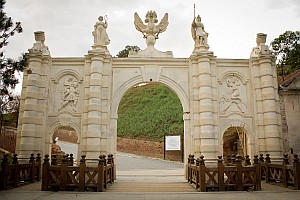 is connected with the golden dream of the Romanians: the union of Transylvania with Romania and foundation of the Romania unitary national state done in December, 1-st, 1918.
Capital city of of the Alba county. Places to see:
- the Fortress built in 1715-1738 and inside there is the Catholic cathedral built in the XIII-th century, the Batthyanaeum Library founded in 1794 and having 60,000 volumes, the Orthodox Cathedral, the Union Hall, the National Museum of the Union
- Abrud - well-preserved buildings with a mediaeval architecture
- Rosia Montana - at the Mining Museum the well-known waxed boards written in Latin
- Sebes - the mediaeval fortress from the XIV-th century
- Aiud - the fortress built in the XV-th century etc.
- Blaj - an important cultural as well as a religious place on Uniates
- Rameti - the monastery (1240) 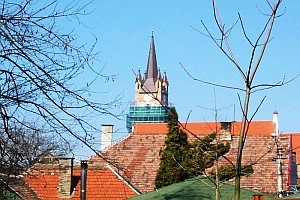 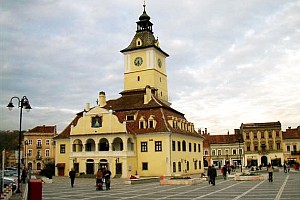 second in the Romanian tourism after the seaside of the Black Sea and first place in the Romanian mountain one.
From here many other tourist zones begin like the spokes of a wheel: the Prahova Valley with its famous Sinaia, Azuga, Busteni Spas, the Bran - Rucar Pass, the Olt Valley ant the mountain and hilly zones of the Covasna county.
Starting Brasov, Poiana Brasov, Predeal, Bran, Zarnesti, Rasnov, Vama Buzaului or the town of Victoria, the mountain can be reached on the first step to tens kilometers, as well as the picturesque peasant households in Bran, Poiana Marului, Tara Barsei, Tara Fagarasului and Vama Buzaului. 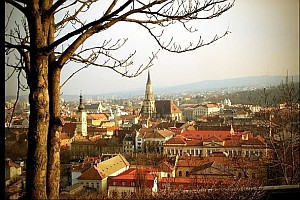 is the capital city of CLUJ county.
The main town of Transylvania has two names: Napoca is the name of the old Dacian fortress, and Cluj is the Latin one from Clusiurn, a closed town.
Its Magyar and German names (Koloszvar, and respectively, Klausenburg) are based on the Latin, Rornanian one.
An important cultural, university and industrial town, Cluj-Napoca was and is a symbol along the history.
The University, Opera House, the music and art Academy as well as the Medical and Pharmaceutics Institute are well-known in Europe.
The Magyars who live here developed remarkably their culture (they have an opera house, a theater and a lot of periodicals) by their known writers, newspapermen, artists and musicians.
A downtown dominated by the gothic "Sf. Mihai" Church tells the history of this town. 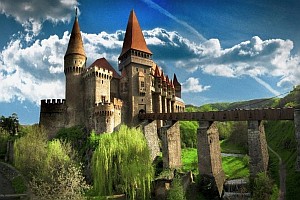 Worth to visit in Deva, the capital city of HUNEDOARA County:
- the Magna Curia Castle built in the XVI-th century which is now the Museum of the Dacian and Roman Civilization
- the Sports High School which is known in the world thanks to famous gymnasts Nadia Comaneci, Lavinia Agache, Daniela Silivas and Lavinia Milosovici
- the Fortress of Deva

Other highlights:
- inside the Cioclovina and Ohaba Ponor Caves there are vestiges of the palaeolithic man
- in Turdas, near Orastie, there are vestiges of the neolithic culture
- in the Orastie Mountains (the Surianul Massif), in Gradistea Muncelului there is Sarmizegetusa Regia, the capital city of the Dacian kings as Burebista and Decebal and in the Hateg Depression there are the ruins of Ulpia Traiana Sarmizegetusa, the capital city of the Roman Dacia.
- at the foot of the Pojana Ruscai Mountains, in the town of Hunedoara, there is the imposing Castle of Corvin Family one of the best preserved mediaeval buildings in the South-Eastern part of Europe.
- and also here the oldest Christian monuments were built in the Middle Age: churches in Densus, Streisingeorgiu, Strei, Sintamarie Orlea, Gurasada, Ribila and Criciur, real masterpieces of the early European culture. 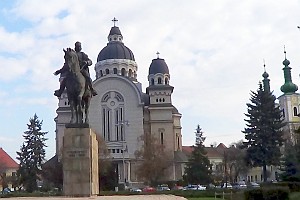 The municipality of Targu Mures is an important tourist center thanks to its social, historical and cultural points of interest and the capital town of MURES county.
Palace of Culture and Political and Administrative Palace with its polychrome roof; the two Orthodox churches - one of them having the biggest painted surface in Romania; the Roman-Catholic Cathedral; the National Theater.
A true sightseeing of this town has to comprise the Mirrors Hall of the Culture Palace the archaeology-history department of the County Museum which was recently reorganized on an up-to-date view, the Art Museum, the County Library with its about 1 million volumes.
This library has the Teleki-Bolyai documentary stock founded in the XVIII-th century by Teleki Samuel, former governor of Transylvania, with its over 200,000 books, journals, maps, incunabuli, engravings.
Close to the memorial museum dedicated to great mathematicians Bolyai Farkas and Bolyai Ianos, there is the so-called "Tabla regeasca", the former high court of Transylvania where Avram Iancu, Al. Papiu Ilarian and other important personalities of the Revolution from 1848 were lawyers.

A sightseeing in Targu Mures would be incomplete without the Fortress with the towers of tanners, butchers, coopers, furriers, and locksmiths, or the church built in a late Gothic style.
The castles of Mures county are most of them, valuable architectural monuments in baroque, gothic or Renaissance styles:
- Bethlen (the XV-XVIII-th century) in an Italian Renaissance style
- Cris Castle (19 km far from Sighisoara)
- Teleky Castle (the XVIII-th century) in baroque style with Transylvanian traditional elements
- Dumbravioara Castle (15 km far from Targu Mures) at Brancovenesti there is the most representative castle situated on the Mures Valley (the XVI-th century). 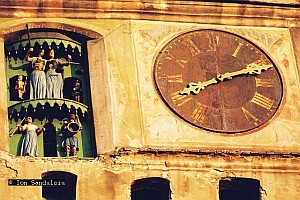 the "Pearl of Tirnava", "a Museum-Town" - as it is named this town situated on the banks of the Tarnava Mare River - impresses with its mediaeval look.
It is a "museum town" because it is the only mediaeval citadel in Europe which is still inhabited.
Situated at 425 m above sea level, it is surrounded by a wall which protects about 150 houses, each of them being architecturally an unique one. The town is dated back in 1280 as a Castrum Rex. Later, in 1345, the Church on the Hill started to be built. It can be reached mounting the 175 steps of a wooden staircase built in 1643.
The Clock Tower is a sturdy and severe building and shows every day a statuette which is a symbol of that day in a week. It was made in Switzerland by the same watchmakers who made the clock of the Tower in Prague.
Here there is the house where Vlad Dracul, son of Mircea cel Batran and father of Vlad Tepes lived between 1431-1435. 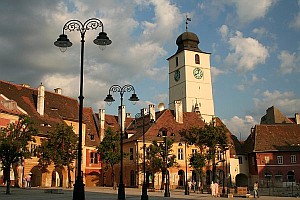 the capital city of SIBIU county, has a lot of points of tourist interest and museums.
This town is documentary certified in 1192-1196 under the name of Cibinium, Villa Hermani, in the XII-XIII-th century and Hermanstadt in 1366.
Sibiu was one of the towns of Luther's reform: here great humanist Nicolae Olahus lived for a long time.
In the XVI-th century Conrad Haas created the first three-staged rocket based on the principles of reaction.

Places to see in Sibiu county:
Cisnadie and Selimber (the battle between Voivode Mihai Viteazu and Andrei Bathory in 1599)
Tarnavele Zone with hills, dedidous forest and vineyards
Roman settlement from Slimnic, silver and bronze currency hoard from Atel etc.
the village ofBiertan where the inscription "Ego Zenovius votum poseni" (I, Zenovius, kept my word) from the IV-th century was discovered. This inscription shows that here there were a Christian community and an impressive churchfortress with four towers among the main important hall-churches in Transylvania.

A very special zone is Marginimea Sibiului with its 18 localities at the foot of the Cibin Mountains covering a surface of 200 sq.km. The inhabitants are known shephards who preserved the traditional customs, folk costumes and original Romanian architecture.
Worth to visit:
- Ethnographic Museum from Rasinari
- Glass Icon Museum from Sibiel - unique in the world with its collection of 70 icons
- Salgo Fortress from Sibiel
- Sun's Glade - sculptural camp from Saliste
- Saxon fortified churches.

Romanian Tour Operator based in Constanta providing travel services in Romania, Romania tours, spa cures, hotel accommodations and Constanta shore excursions. We will be always happy to assist you with your travel plans all over Romania, Transylvania included.